I am not too happy how this block turned out. The colours are too similar in value, and the triangles’ points don’t always meet where they should. But I decided that I would not be miserable if this block goes into the sampler, so I will leave it as it is.

I think this block a very interesting one, ever since I first saw it in Laurie Hird’s book. It is somehow very plain, with only two colours and the geometric forms. But still, I can’t stop looking at it.

There are the two maple leaves, blue in my case. And then there is this second form, two arrows pointing out of the picture. If you would turn these arrows by 180 degree, the leaves will become arrows too, and then you would have four arrows pointing to the middle. When browsing for other quilters’ examples of the Ozark Maple Leaf block, I found quite a number of blocks where the quilter had chosen to have rather four arrows—pointing to the middle or to the corners—than having a single leaf.

Maybe having four arrows is the better solution, since a traditional maple leaf block is featured in the Farmer’s Wife sampler as well. Anyway, I like the Ozark Maple Leaf block far better than the traditional block. I think it has a somewhat fresher, more modern look. Of course, I wanted to find out what “Ozark” means. I looked it up at wikipedia, but still am a little bit clueless. Apparently, it is a county in Missouri, and a mountain plateau, but I couldn’t find out if there is maybe a special type of maple tree that only grows in these woods or something like that. I did find out, however, that the Ozark Maple block is a rather antique geometric quilt design—but not looking in the least fusty!

Notwithstanding the name, Peace & Plenty cost me some nerves—no peace, but plenty of waste fabric.

And all this solely because I wanted to save time, some cutting, and thread. Technically, this block consists of 32 half square triangles. But since 16 of them meet with the same colour/print, I decided to take a shortcut there. Which meant I would neither use Laurie’s templates, nor paper piece the block. Instead I wanted to figure out what size I had to cut my squares in order to get the four quarter square triangles you can see in the middle.—And I simply couldn’t. I measured, and calculated, and read tips on the internet—but no, it would not work out.

I will not write down how I finally succeeded in sewing the block you can see above. I am neither proud of it, nor did I save any fabric, thread, or time, as a matter of fact. But up to now, I can dispose of two ugly blocks, one oversized block, and some small quarter square triangle blocks, and now am playing with the thought of sewing them into a “quilt of failures” in the end, since I am sure, I will add to their number in time.

Temperatures in the sewing room—or any other room, or outside, as a matter of fact—are way too high. And sitting beside my ironing board, listening to the little lamp switching on and off when the iron is heating, doesn’t help cooling down. Working with sticky fingers is an absolute no-go for me. Yet, I cannot stay away from my sewing machine …

I think I have been sewing nearly every day this past week. It has been the second of my two weeks holiday. And I must say, sitting at my Bernina, patching up some Farmer’s Wife blocks, I had many 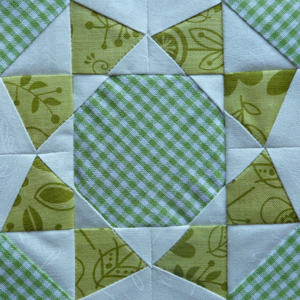 This block, for instance, looks harder than it actually was. But: I did it again! A block all in green, no turquoise. I didn’t mean to! It’s the new fabric’s fault. I simply had to include the green/white plaid. Bought a scrap piece for 1 Euro. I couldn’t help it. What? Buying it, or including it right in the next block that came my way. Both, of course! I am very happy with the result.

As a non-native English writer, of course, I asked myself why this block is called Periwinkle. I soon found out that periwinkle is the name of an animal (snail) as well as a plant. And I actually do see both of them in this block. 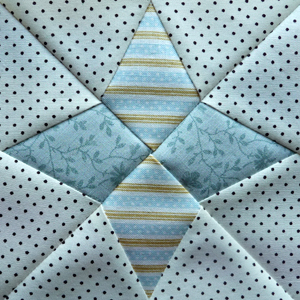 The periwinkle snail’s shell roughly has this shape, so you can “see” four periwinkles in this quilt block.

(I admit, this is not a periwinkle, but a sea snail with a similar shell. I wasn’t able to find a picture of a periwinkle that I could post here.)

The petals of the plant periwinkle have this shape, usually five petals to one blossom, so you can “see” a periwinkle blossom with only four petals in this quilt block. 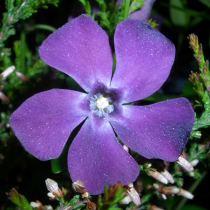 Never mind what you see, this block with its austere geometry wasn’t too easy to plan and sew, despite its easy looks.

Oh no! I did another flop! And it is Pine Tree, of all blocks! So many pieces, so elaborate! I don’t know what came into my head when deciding on these prints. And I took especial care to the direction of the stripe print. Boohoo!

To top it off, the block is distorted like no other. Worst block so far!

I hope you are with me when I say: Molto meglio!

Then I arranged the squares. I wanted a casual look. Not looking too arranged, if you know what I mean. I remember the tiler who did our kitchen walls saying, that if you wanted the embellished tiles to look as if they were scattered there by chance, you had to arrange them in some order—that would look casual. So he cemented four of the embellished tiles in a perfect square directly above the cooker, and it works! It looks as if the square pattern was there by chance. I would never have believed him, but he was right in the end.

I was too lazy to do this block in paper piecing. And now look at the result. Not too satisfactory. But I decided to keep the block nevertheless because it works anyway. You just have to step back a little and watch from a distance. Normally, I would not hide behind what sounds like an excuse for inaccurate work, but I really think it is true for this block. 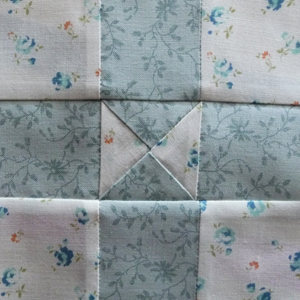 I wish I had an orchard. Fruit trees are a wonderful thing. I remember fruit picking when I was young, in my aunt’s garden, and in some friends of my parents’ orchards: cherries, apples, pears, plums, and mirabelles. Since we planted almost every single shrub or tree in our garden by ourselves, we do not have too many big plants. We are very proud to have a peach tree since last fall, and I am eagerly watching its fruits ripen. I counted fourteen, some weeks ago, but would be very content if we could gather six good fruits in August.

When planning this block, I couldn’t bring myself to decide what fabrics to choose and, above all, how many different.

I was very much tempted to use three different prints, instead of two. A third one for the centre square and the four little adjoining squares. Or to do the green half square triangles in a different print. I found many examples of these versions and liked them all. 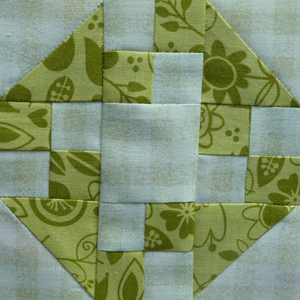 In the end, I followed Laurie’s example. But I gave this block a new twist by choosing only green prints. Green being the “special” colour in my otherwise tourquoise quilt, I am curious about how this block will fit into the quilt in the long run.

You might have noticed that Prairie Queen consists of almost exactly the same components as Railroad. Yet, how different do they look!

Farmer’s wife: Puss in the Corner

After sewing this block, I did a little research on the name. I didn’t know that Puss in the Corner is a children’s game. Surely, games like this do exist in every country, with similar rules but under various names: one player stands in the centre and has to try to gain a free place, and the player who looses his place is the next one to stand in the centre trying to gain a free place …

Puss in the Corner

I admit that I had some difficulty in sewing this block, though it looks and is a very simple design. I cannot really explain how it happened, but I actually needed three attempts until I finally came up with this result. Maybe, it was because I started before work, or maybe I just had a bad day. On the first attempt, I made the mistake of ripping off the paper before cutting the pieces to their final size plus seam allowance. When I noticed, I still tried to save it, but it would not work.

Next, I tried to rotary cut the half square triangles, because I was to lazy to turn on the PC and print out new paper piecing patterns. I used my Robert Kaufmann App to calculate the size, and at first it really looked alright, but in the end, the pieced corner squares were too big.

I gave up then and went to work, printed out a new set of paper piecing patterns in the evening, and finished it off in no time. Strange …

But now that I know of the children’s game as the name giver of this block, I think that my approach to this block fits to it perfectly. I was puss, so to speak, and needed three attempts to gain a corner.